The Long Lasting Effects of Old Man Winter on Metal 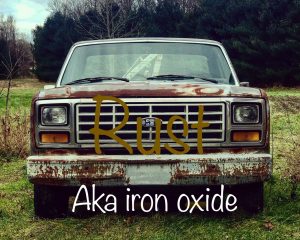 In short, it’s a combination of iron and oxygen known as iron oxide. A chemical reaction forms this unbalance which takes place as iron (or alloys containing iron, like steel) is exposed to water and air. H2O and CO2 from the air (moisture and carbon dioxide) creates a weak form of acid which dissolves the iron. Independent hydrogen and oxygen atoms meet and bond with the iron atoms and create this previously mentioned iron oxide. Road salts and other products for melting ice (calcium / magnesium chlorides) speed up this chemical reaction.

While surface rust in itself is not the most aesthetically pleasing, there is a deeper concern. Despite iron’s impressive strength, iron oxide (rust) is exceedingly brittle. Think about the ease of crumbling rust between your fingers. Consider this condition in the chassis / frame of your vehicle. Rust and rot in automobile underbodies is becoming a far larger issue in our community, and it affects the safety of our families in the event of a crash, and can even be the cause of a crash when structural concerns are not identified.

It is important to point out that rust is not limited to the areas of a vehicle only visible when standing next to it. Exposed metal underneath a car are prime victims for rust. The underbody of your vehicle is where the architectural components that make up the structure of the vehicle exist.

While automakers are working to address the long-term effects of rust, primarily by engineering aluminum or carbon fiber into chassis designs; few automobiles escape the grasp of iron oxide, simply because of cost efficiency and profit margins, especially when factoring the costs of using strong alternative metals (that do not oxidize) in tens-of-thousands of vehicles. That said, there is certainly a larger awareness industry-wide now than years ago, and thus, a larger collaborative effort to address undercarriage protection has been made.

Mercedes-Benz, Audi, and BMW have utilized protective underbody shielding for years (plastic coverings), which is significantly more effective than that of Asian or Domestic makes, though it certainly doesn’t make them immune to related issues, especially when corrosive materials become trapped above shielding components, resulting in heavy isolated iron oxidization in the more humid months of the year.

The chemicals used on our roadways in the winter months are, quite simply put, catastrophically destructive to our infrastructure. This is, in large part, due to the corners being cut by Town and State agencies to apply the deicing chemicals, followed by a neutralizer agent. The neutralizer agent in most counties and certainly by the State (per multiple sources), is often disregarded and thus not applied.

Brake lines and frame / sub-frames are among the most significant items on the long list of chassis components that can rust/rot, and we urge the community to have their vehicles inspected at their next routine service. Many service facilities, including ours, include complimentary safety inspection protocols with every service visit.

When we inspect any vehicle, there are multiple visual and structural safety inspections that involve the integrity of the chassis, and rust conditions are at the forefront of any report when outside of the scope of what is deemed “acceptable”.

If rust is cosmetic or surface deep, this is considered “acceptable”, especially in our climate due to our harsh winters and road salts and de-icAnchoring chemicals used. If the rust affects the integrity of your vehicle’s chassis (i.e. you can perforate the frame with a screwdriver or pry bar), we always make certain to advise that it is time to retire the vehicle to the salvage yard.

On the topic, there are a number of Toyota trucks (Tacoma and Tundra) that were affected by a sub-par grade of steel and are covered under an extended service campaign through Toyota Motor Corporation (free frame replacement when the necessary criteria is met)

We offer an undercoating service using a product called Fluid Film. This is an application that is recommended once a year and uses a lanolin based product to coat the areas underneath a vehicle that are prone to rust. This natural product is chemical free, environmentally safe, and seals in any existing calcium chlorides (preventing growth or the spread of iron oxide) while also protecting the underbody from any new reactions.

Underbody / undercarriage washes are also important, but only if you keep up with them throughout the winter months. Remember, moisture / water is the actual cause of chemical reactions which allows for iron oxide to flourish!