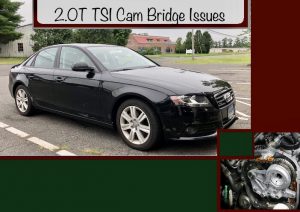 The purpose of this post is to educate owners of 2.0 liter TSI Volkswagen / Audi motors about a critical design flaw which can lead to very swift, catastrophic engine damage. For 2.0T TSI VW/Audi motors that have engine code CBFA, CCTA, CAEB or CPMA; it is vital that you read this briefing pertaining to a common irregularity with your motor.

The camshaft bridge (also referred to as a “ladder”) in your 2.0T is a vital engine component that is responsible for distributing engine oil (hydraulic lubrication) to the camshafts themselves, and this “bridge” contains an engineered cavity purpose-built to house a regulated check ball that regulates oil pressure to the camshafts.

The design flaw we are referring to in this post is a poorly mounted protective metal screen which protects the pressure regulation check ball. This screen is supposed to be rolled/peened over the plastic lip surrounding the cavity, but most times is found to be loose or missing (the manufacturer’s engineering with this design was flawed). A Technical Service Bulletin was, as a result, recently issued through VW/Audi, which recommends the removal of the screen when present, regardless of replacement or re-use of the bridge / ladder assembly.

The reason for the aforementioned screen removal is due to what generally occurs as a result of the screen detaching, which is rather catastrophic.

First, the screen detaches, and next ping pongs around on the camshaft(s). If the screen disrupts the camshaft rotation, that restriction causes an immediate domino effect which seizes rotation and bends intake/exhaust valves which very quickly causes internal engine chaos resulting in damage or destruction at the cylinder head.

Many times, we find a distinctive engine fault code (stored or active, P0016) which helps us to immediately discern that the upper timing cover and camshaft bridge / ladder need to be removed for careful inspection. Because of the regularity of finding preliminary damages once the engine computer has identified irregularities, we recommend routine removal of the upper timing cover at between 50,000 and 80,000 miles for inspection of timing chain tensioner and the check valve screen. Otherwise, the internals of this engine require a massive overhaul, involving machining / rebuilding the cylinder head, with further replacement of essential components including the exhaust and intake valves. Other vital timing chain components also require replacement in combination with this service and can reach substantially high prices, sometimes rendering the service inadvisable, with a long block replacement being more sensible. With a routine timing chain replacement service, we also address the above items.

Warning signs to look out for include the following:

The above list contains an account of what we’ve experienced through both customer interface and our own internal research and observations. There are likely to be other early warning signs that we have yet to encounter or be made aware of, but it’s important to note that all of the above items can also occur individually and are not always an immediate cause for concern as they may relate to other less critical conditions.

The only way to be advised properly is to schedule an appointment to bring your Volkswagen or Audi 2.0T to Auto-Bon so that we can perform a proper inspection to verify that the issue at hand relates to one of these critical services.

Next Post Using the Right Engine Oil for Your Car »